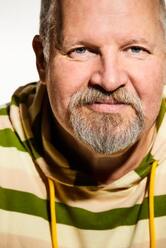 Chris Wells is an award winning actor, writer, teacher and community leader.
He’s the founding artistic director of The Secret City, a secular church of art. With events in New York City,  Los  Angeles, the Hudson Valley, online and beyond, Wells has brought the joyful and transcendent work of The Secret City to thousands of people.
In 2010, he received a Special Citation Obie Award for creating The Secret City,  and for service to the artistic community of New York City.
Wells is also an award winning actor who’s developed and performed original work with companies such as The Actors’ Gang, SITI Company, Cornerstone Theater Company and more.
As a teacher, Wells leads weekly online writing workshops for writers of all kinds, coaches individual writers and has created writing and storytelling workshops for OMEGA, LACMA, The Actors’ Center and more.
Wells lives with his husband, the painter Bobby Lucy, in Woodstock, NY, where he’s just completed his first novel.
​
Big & Salty is a show / podcast of stories by Chris Wells, told before a live audience. Many of the stories were written for The Secret City. The first season will be 12 episodes.
​
Produced by Matty Rosenberg & Chris Wells @ radiofreerhinecliff.org
Graphics by Cathy James and Anni Poppen
Music by Fred Cassidy