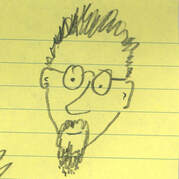 Norm Magnusson is an artist and father of three who thinks he’s right more often than he actually is but figures: “that’s where the learning is . . . when you’re wrong.” He loves to talk with people and ask a million questions and tries his best to keep his yapper shut long enough for his guests to say something fun, funny, or informative. He’s deeply appreciative for all the people who come to the Nook @ The Epicurean to do just that and thanks to Radio Free Rhinecliff and the Epicurean for making it all possible.
“Correct Me if I’m Norm” is a good natured one-on-one (mostly) free-formish interview-format program, covering all topics from the personal to the universal. Adult themes, childish banter, strong language, and a lot of levity. 60 minutes.